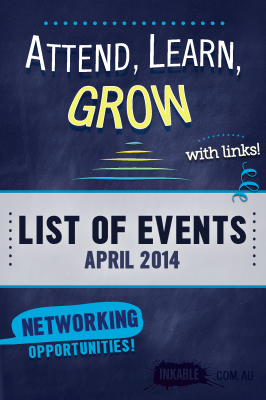 April has some bonzer networking opportunities for you! We hope last month’s post helped you make new friends and get more business.

Let’s keep the ball rolling, shall we?

In a previous post, we talked about the 5 Smart Ways to Grow Your Small Business Today.

Happy troopers that we are, we’re supplementing No.4 with a resource that’s chock-full of Networking goodness for anyone looking to do some serious legwork and more business.

April 02, Sydney – So you want to Start a Small Business

April 04, Nelson Bay – LinkedIn the way forward for your business

April 15, Blacktown – So you want to Start a Small Business

April 09, Richmond – How market research can help your business

April 24, Camberwell – How to Improve Your Health and Create Bigger Profits

April 08, Braddon –The In’s & Out’s of Importing and Exporting

April 16, Babinda – Getting online and social

April 08, Mawson Lakes – Principles of Email Marketing for Your Business

April 30, Newton – Get the most out of your Linkedin profile

April 02, Balcatta – Why are you busy and poor?

This list of curated events is just for you, from one small business team to another, because we believe there’s always room for new friends.

Stay tuned for May’s set of events—we’ll be sure to update you regularly.

Good luck, and get that calendar filled out. Thanks for dropping by!